Portugal A Success? You Be The Judge!

Portugal’s drug decriminalisation in 2001 is touted as the positive example New Zealand should aspire to. The basis for such a proposition was based on a 2009 report by the libertarian think tank, the Cato Institute. But the report has been shown to have many shortcomings and weaknesses.

Basically, decriminalisation did not trigger dramatic changes in drug-related behaviour because, as an analysis of Portugal’s pre-decriminalisation laws and practices reveals, the reforms were more modest than suggested by the media attention they received.

In 2010, the Obama Administration essentially dismissed the Cato report stating it was “difficult, however, to draw any clear, reliable conclusions from the report regarding the impact of Portugal’s drug policy changes.”

The reports limitations included:
* supporting analysis not definitive – sometimes focusing on prevalence rate changes as small as 0.8%.
* fails to recognize other factors – the report attributes favourable trends as a direct result of decriminalisation without acknowledging, for example, the decline in drug-related deaths that began prior to decriminalisation.
* adverse data trends not reported – adverse social effects – such as the increase in drug-related deaths in Portugal between 2004 and 2006 – is sometimes ignored, downplayed, or not given equal recognition.
* core drug‐use reduction claims not conclusive – as “proof” of drug legalisation’s success, the report trumpets a decline in the rate of illicit drug usage among 15- to 19- year-olds from 2001 to 2007, while ignoring increased rates in the 15-24 age group and an even greater increase in the 20-24 population over the same period. In a similar vein, the report emphasises decreases in lifetime prevalence rates for the 13-18 age group from 2001 to 2006 and for heroin use in the 16-18 age group from 1999 to 2005. But, once again, it downplays increases in the lifetime prevalence rates for the 15-24 age group between 2001 and 2006, and for the 16-18 age group between 1999 and 2005.

Statistics compiled by the European Monitoring Centre for Drugs and Drug Addiction (EMCDDA) indicate that between 2001 and 2007, lifetime prevalence rates for cannabis, cocaine, amphetamines, ecstasy, and LSD have risen for the Portuguese general population (ages 15-64) and for the 15-34 age group.

Although high-school student use fell from 2001 to 2007, it rose steeply from 2006 to 2011. This included cannabis, amphetamines and ecstasy. 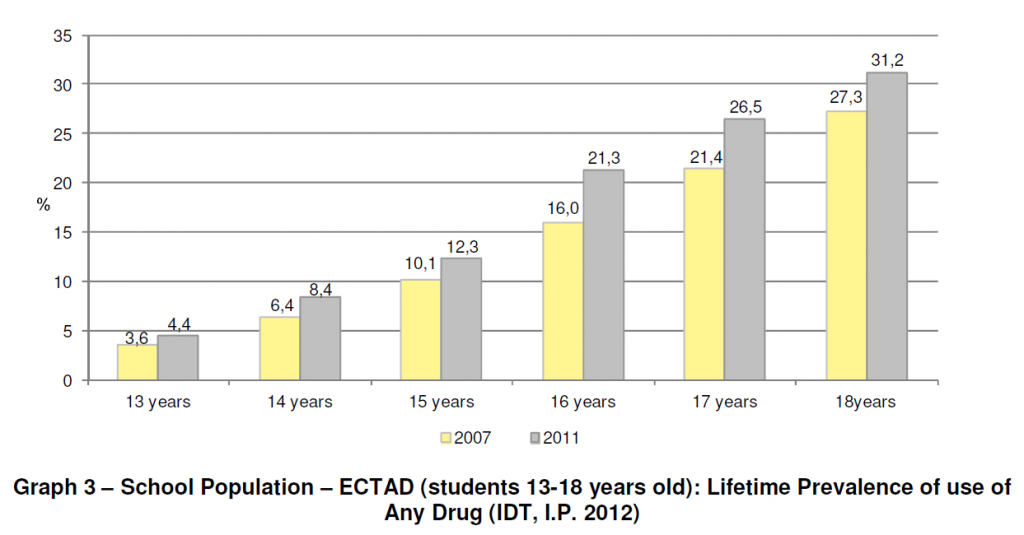 “A thorough report in 2011 by the European Monitoring Center for Drugs and Drug and Addiction (EMCDDA) presented a more nuanced picture. EMCDDA concluded that Portugal’s drug policy of depenalisation is not a “magic bullet” and that “the country still has high levels of problem drug use and HIV infection, and does not show specific developments in its drug situation that would clearly distinguish it from other European countries that have a different policy.”
UNODC (United Nations Office on Drugs and Crime): Cannabis A Short Review (2012)

“Our drug problems are not solved.”
João Goulão, director-general of SICAD: the Centre for Intervention on Addictive Behaviours and Dependencies. Known as Portugal’s ‘drug czar’.

“There is a black market – “people don’t know what they are buying, what they are selling” – the system “is confusing”, with many people believing that decriminalisation means that drugs are legal.”
Adriana Curado, project coordinator at the GAT Harm Reduction Centre

It is also significant to note that Portugal recently voted down a bill proposing to legalise medicinal – including grow-your-own – cannabis, and opted for a more confined law allowing use of some medicinal cannabis.

Portugal coerces treatment and rehab, as does Sweden which reduced its drug use from the late 1970s from the highest levels in Europe to the lowest in the developed world by the early 1990s.

Dalgarno Institute (Australia): Portugal Drug Policy – A Review of the Evidence
“The way that the Portugal Drug Policy model is ‘spun’ has more to do with Harm Reduction and/or Drug use acceptance than anything else. The current ‘positive’ (evidence and outcome ignoring) interpretation/ implementation /promotion of the Portugal Drug Policy model does not facilitate Best-Practice – Demand Reduction/Prevention (Deny or delaying uptake of illicit drugs – building resiliency into the community). Nor does it actively facilitate drug use exiting recovery from illicit drug use. Again, its tenure is more focused on ‘net community benefit’, attempting to manage the damage (and enabling of sustained/ongoing drug use) and consequently it inadvertently fosters the normalisation of an illicit drug using culture.”

Sweden and Iceland have a proven success in solidly reducing drug use, where education and rehabilitation are central.

Sweden made coerced rehabilitation and school education centrepieces of their restrictive drug policy with the result that their drug use dropped from the highest levels in Europe to the lowest in the developed world.

In 1969, Sweden concentrated heavily on law enforcement measures, but it also looked at demand reduction issues, particularly the provision of treatment services, establishing a demand reduction program operated by youth organisations. An advertising and promotion campaign was launched with literature distribution, newspaper and media advertising. The maximum penalty for serious narcotics offences was increased.

Finally, in 1984 the government adopted its vision toward creating a ‘Drug Free Sweden’. Organisations, political parties and youth organisations encouraged all the community to play an active role, stating: “Everybody who comes in contact with the problem must be engaged. The authorities can never relieve [individuals] from personal responsibility and participation. Efforts by parents, family and friends are especially important. Also, schools and non-governmental organisations are important instruments in the struggle against drugs.”

A study conducted in 2000 supported the view that the new, tougher policy had had a preventive effect on drug use.

A report by the UNODC praised Sweden for having one of the lowest drug usage rates in the western world, and attributed this to a drug policy that invested heavily in prevention and treatment (including free community services), as well as in strict law enforcement.

The Swedish drug policy has the support of Swedes. The priorities are:
* Coerced rehabilitation
* Education
* Maintenance of criminal sanctions This means that decriminalisation of drug use is seen as an impediment to seeking a drug-free society.

Sweden National Association for a Drug-Free Society (RNS): The Swedish Drug Policy Experience: Past to Present

Iceland reduced its illicit drug use by 50% by concentrating on resilience-based education in their schools.

Portugal decriminalised drugs resulting in teen use doubling in a decade
Daily Mail 31 October 2014
The nation held up by the Liberal Democrats yesterday as a shining example of how to win the war on drugs is far from the unqualified success story they make out.

For the number of children using drugs in Portugal has more than doubled since the country’s laws were liberalised, the latest figures show. A decade after the law was relaxed, nearly a fifth of 15 and 16-year-olds use drugs – well over twice the number in the years before decriminalisation.

The controversial Home Office report commissioned by the Liberal Democrats states: ‘It is clear that there has not been a lasting and significant increase in drug use in Portugal since 2001.’ But the evidence suggests otherwise.

The most recent independent report on what is happening in Portugal shows that in 1995 eight per cent of Portuguese teenagers had tried drugs.

Do we really want Portugal’s drug laws?
The Spectator 18 June 2017
‘The war on drugs has failed,’ asserted Shirley Cramer, chief executive of the Royal Society for Public health in the latest propaganda coup for the pro-drug lobby. Her society, along with the Faculty of Public Health, have parroted the familiar call among metropolitan liberals for drugs to be decriminalised. Their argument is that we should drop our punitive approach to drugs and be more like Portugal, which decriminalised drugs in 2001 and now, it claims, has fewer deaths from drug use that.

There are a couple of problems with this. Firstly, drug decriminalisation in Portugal is only a success if you cherry-pick your statistics carefully. If you want to make the opposite argument you can pick a few which work in the other direction – such as pointing out that there has been 40 per cent increase in homicides related to drugs, and that HIV infection related to intravenous drug use were by 2005 the third highest in Europe.

But there is another rather fundamental problem with the Royal Society for Public Health’s argument. Britain only has a punitive drugs policy in theory. In practice, we have a softer attitude even than decriminalised Portugal. Theoretically, you can get a 7-year sentence for possession of class A drugs like heroin and crack cocaine, and five years for possession of a class B drug like cannabis. Yet in practice, British drug users can, by and large, snort and smoke with impunity. A freedom of information request in 2011 revealed that only 554 people were in jail for drug possession, and a further 3501 for possession with intent to supply. Even Harry Hendron, the barrister recently convicted of supplying drugs which killed his 18-year-old Columbian boyfriend has not been sent to jail, but was given a community sentence instead.

Get hooked on opiates, and the British state will even fix you up with methadone for free. There are now 140,000 state-sponsored methadone users, each of them costing taxpayers £3,000 a year. Is that really a ‘punitive’ policy?

British drug-users wouldn’t like the Portuguese regime – where, contrary to what some try to imply, drugs remain illegal. Those caught with drugs are hauled before a ‘commission for the dissuasion of drug addiction’. They may not get a criminal record but they can be fined, placed on a compulsory treatment programme, or even have their passport confiscated. I only wish we used such firm measures.

The pro-drug lobby likes to quote Portugal at us not because it wants Britain to copy what Portugal has done but because it counts on us not knowing what actually happens to drug-users in Portugal and hopes that, like the Times headline did on Thursday, we will confuse the words ‘decriminalised’ with ‘made legal’. The latter is what metropolitan liberals really want, not because they are especially concerned with the health of drug addicts on distant council estates but because they rather like using drugs themselves.

“I don’t believe a society where people have addiction is part of life. There are people who are happy in the system, I believe in the treatment in the drug dependents and that it is possible to put a final part in their addiction. I believe that every system, every policy system, should have a final goal; life without drugs. I believe they can reach a life without drugs, I believe we have always to have to fight against cancer and poverty and unhappiness and hunger and drugs.” According to statistics compiled by the European Monitoring Centre for Drugs and Drug Addiction (EMCDDA) between 2001-07, after decriminalisation, more people took cannabis, cocaine, amphetamines, ecstasy, and LSD – but decreased in neighbouring Spain between 2003-2008. “Kofi Annan said a very interesting thing – the eradication of drugs in our planet is a difficult task but we can go forward, we can go through it. Since decriminalisation in Portugal there was an increase in every single drug. In cannabis and cocaine and ecstasy and in HIV aids,” he said.